This is what you might call a classic survival memoir. It is about how easily individuals can fall through the gaps and lose themselves, but most of all it is about how people survive against the odds—in this instance, with the sustaining power of poetry and perhaps ultimately, love. ‘Sectioned’ is an understated memoir leavened with wry humour. It documents a lost world of 1980’s squats, homelessness, hostels, half way houses, prison—interrupted by four stints in the type of vast old asylums that no longer exist. For me, it recalled Samuel Beckett’s novel ‘Murphy’, a story of life adrift in the 1950’s. Three decades later, life on the margins is a similarly desultory trawl. 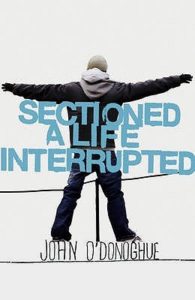 I must admit a vested interest here. My mother spent a number of years in psychiatric institutions but wouldn’t speak about it. The glimpses offered here are mostly benign, though the prospect of the long-term wards hover as a threat. Like any other society, there are moments of humour and companionship as well as the darker aspects. There is a sense in these old institutions with their sprawling grounds that they did offer some respite.

People break down when their sense of identity is not longer sustainable. It is no accident that there are higher incidences of mental illness among minority communities. My mother was part of the same wave of Irish immigration as John’s parents. For both, the wider support structures had already been ruptured. When John’s father dies, the family falls apart. My mother knew that with two small children she would never go ‘home.’ Identity is fragile. Who are we? What shall we be? In John’s case, the death of his father comes at that most fragile of times, adolescence. It is not really a surprise that the centre cannot hold. Unlike my mother, he is able to voice his experience. For a previous generation, the subject was taboo.

‘Sectioned’ is also a London-Irish story, with a fondness for the city and intimate knowledge of its hidden, intimate places – shot through with trips to Ireland, to a life that could never be. It’s a story about rupture and healing, most of all it is about the triumph of the human spirit. It would be easy to see a young man like John on the street and dismiss him as a loser, a hopeless case, yet he is now a university lecturer. He has validation now, yet he was always a poet.

How easily we allow people to fall by the wayside, to disappear. The endless trawl becomes a search for a way of being. This is a story about holding on and letting go, of finding a way to make sense of the past, of the transforming power of creativity.

Reviews are funny things: as any writer will tell you, any reviews are better than none. Writing a novel about the Troubles in 1996, two years before the Good Friday Agreement was bound to be contentious. The publishers were so pessimistic they weren’t expecting any coverage at all. The hoped for endorsement didn’t come through:… END_OF_DOCUMENT_TOKEN_TO_BE_REPLACED

I have been preparing the new kindle edition of my first novel and thinking about violence. Set in the 1981, the year of the Hunger Strikes (a transitional year in terms of the Troubles), Violent Shadows looks at how and why somebody (a young woman), might get involved in political violence. As it turns out,… END_OF_DOCUMENT_TOKEN_TO_BE_REPLACED

Before her glorious reincarnation, Eliza Gilbert lived quietly in Islington for three months. She had left an abusive marriage in India and a grand romance had ended. Twenty years old, with only a small temporary allowance from her husband to live on, she moved to a humble cottage in Hornsey Road. Her naive dreams of… END_OF_DOCUMENT_TOKEN_TO_BE_REPLACED

Paul Shreber is a recently retired High Court judge, a respectable member of fin de siècle Dresden society, the very embodiment of his age and class and time. One quiet day, his orderly life is thrown out of kilter. Small, inconsequential details become ominous: an unexpected, and emotionally charged, incident is stripped of all meaning.… END_OF_DOCUMENT_TOKEN_TO_BE_REPLACED

By the time I was six years old, I understood the world of institutions inside out. Tall walls, locked doors; who holds the key, who wears the uniform. So when we moved into the grounds of a former military mental hospital, I recognised the vast central building for what it was. It was a container—a… END_OF_DOCUMENT_TOKEN_TO_BE_REPLACED

I am sitting downstairs on the 73 bus squeezed into the window seat by a big black girl with lots of shopping. She really is big. I really am squeezed in. It is 2008 and she is listening to Hallelujah on her MP3 player. Hallelujah is a song written by Leonard Cohen. It is also… END_OF_DOCUMENT_TOKEN_TO_BE_REPLACED

In the refectory of a closed order, the nuns are celebrating the initiation of two young novices with tea and Victoria sponge cake. When the tea urn is empty, two small girls from the children’s home next door sit on the trolley and a young nun wheels them round and round her robes flying up… END_OF_DOCUMENT_TOKEN_TO_BE_REPLACED